Elvis Presley was the first international rock & roll star, and, back in the day, Elvis-mania was bursting at the seams worldwide. Reports of his wild live shows, innocent defiance and raw sex-appeal resonated deep within youth culture. This appeal was so strong that it reached far-off, exotic lands. And in Malaysia, the King of Rock & Roll was rapidly embraced by young people. Many Malays were not only quick to align themselves with this new symbol of rebellious freedom but inspired to pick up a microphone as well. One such lad was Rocky Teoh.

I discovered Rocky Teoh when a friend sent me a homemade comp of 60’s Singapore pop, beat and garage. Rocky stood out not only because he sounded like Elvis, but because he had that je ne sais quoi possessed by the greats like Eddie Cochran, Keith Richards and Star Trek’s Mr. Spock. Born Teoh Beng Hock, in Taiping, Perak, on April 2, 1946, his father was a successful pork salesman. Hock was the eldest of six boys and of Hokkien descent.

In the early 1960s, in Taiping (about 50 miles North West of Ipoh), in the state of Perak, Elvis reigned supreme. Singapore had quite a happening scene as did neighboring Malay countries. The Western influences were imported by American and European service men who brought their music with them. Malaysians were both influenced and inspired and many new bands cropped up, catering to these visitors from the West. Kuala Lumpur was a common stop for popular touring A Go Go acts from China, Thailand and Singapore.

Rocky was something of a teruna (Malay slang for an “adolescent male all up in it”) in his late-teens. Around 1962, he began to associate with the Blue Jean Boys, a notorious gang of bullies about town. It was common knowledge that he lived above Tai Chien Coffee Shop where he could be heard rehearsing with a band.

It was a very happening scene for teenagers around Taiping and Ipoh in 1963. Central to this scene were Talentime Shows in which bands gave matinee performances at cinema houses. It was all the rage for Taiping’s teens to flock to movie theaters to catch a flick with an A Go Go band. A slew of bands were playing around: The Tornados, The Hunters, Los Indians, The Exodus, The Telstars, The Flames and later, The Phantoms. The Tornados consisted of prison warders and the band was backed by the prison department. The Hunters played only songs by The Shadows. In those days, these bands were hot-bookings at all weddings and functions organized by the Taiping Town Council. During the 1960s, celebrations of the Merdeka, Malay independence day from the Britain, would no have been much of a celebration without their bands.

About this time, Rocky was a local fave at the Talentime Shows and had many Elvis Champion titles under his belt. It is reported that more than once his Blue Jeans Gang booed the competitors. But when Rocky hit the stage they clapped loudly and gave him a standing ovation – perhaps the Malay equivalent of payola (Mayola?). At age 18, Rocky was even known outside Taiping for his appearances in Ipoh, where he would often sing on stage prior to an Elvis movie. He was backed by many bands around Taiping, such as, The Blue Diamonds, The Mirages, Los Indians, The Voltaires, The Castinos and, by Ipoh’s biggest OB Cha-Cha band, The Fabulous Falcons. 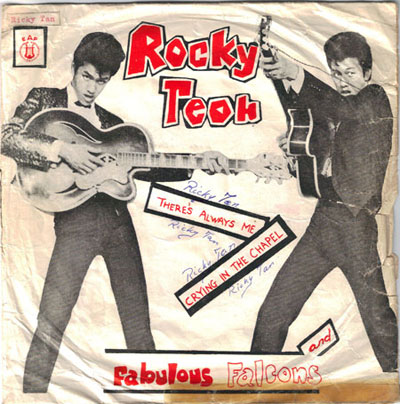 ’65 was a very good year, in late 1964, EAP Recording Company signed Rocky. He recorded his first 45 two-track single with Ipoh’s Fabulous Falcons. Both songs were his personal Elvis favorites, Crying In The Chapel b/w There’s Always Me. It sold quite well. On There’s Always Me, the combination of cheap recording and Poison-Ivy-Cramps-like guitar breaks make the track a winner. Rocky’s haunting voice is overwhelmed by the band’s raising volume and gets lost in the mix, which devolves into waves of audio chaos.

In 1965, at 19, Rocky released his 1st EP (extended play) four-track 7″ record, featuring: Jacqueline & Your Cheatin’ Heart b/w Valley of Tears & Mean Woman Blues. It was recorded with T.A. and The Voltaires, also on EAP Recordings. The title tune, Jacqueline, was a self-penned composition put to a traditional Chinese song called Yeh Lai Siang. This tune was written for his childhood sweetheart who later became his wife, and, yes, her name was Jacqueline, and she was a very pretty girl from Taiping. The record went to #1 locally and was the biggest hit of his career.

In 1965 Rocky also won the coveted title, ‘Elvis Presley of Ipoh’. The prize included a roadshow contract to tour all over Singapore and Malaysia. He hit the road with The Fabulous Falcons and performed at Cathay’s Cinemas as far away as Sarawak and Sabah. During a show in Singapore, Rocky and the Falcons were booed by Singaporeans. This did not sit well with these Ipoh bad boys. Later on the tour, once back in Ipoh, there was a riot in the theater when the local rabid Rocky faithfuls reciprocated with boos and obscenities directed at The Quest, a group from Singapore. The show was interrupted and cancelled and the Quest had to be escorted back to their hotel to avoid a retaliatory pummeling. 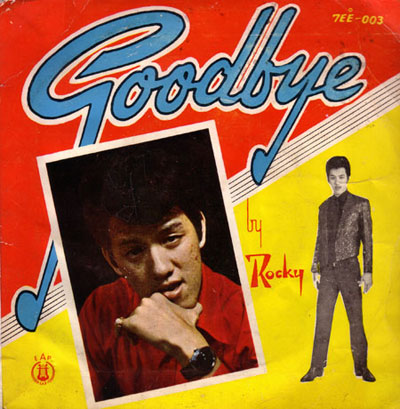 The following year, 1966, Rocky signed with another label, got a new band and toured Thailand. He recorded his next two EPs with a couple of Taiping bands for Supersound Records. First with The Castinos, churning out Lonely Night & I Will Wait For You b/w I Gotta Know & My Love Will Never End. This was followed by Sorrowful Memory & Little Sister b/w Pretend & I Really Don’t Want To Know, with The Mirages. That same year Rocky released yet another 4 song EP on a third label, Tung Po Records. This EP featured: Memphis Tennessee & What’d I Say b/w Thinking of You & Kiss Me Once. Tung Po Records compiled this EP with the two on Supersound, which was released as the LP Rocky Teoh Hit Album. 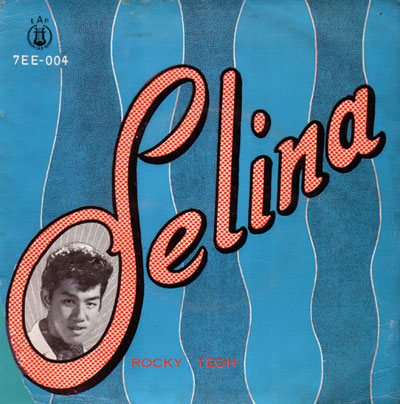 During 1967, Rocky kept on TCB-ing . He ditched crediting his backing band and recorded two more EPs for Tung Po: Call Me Lonesome, You’re Sixteen b/w House that has Everything, Cool Wind, and King Drummer, Never Ending b/w Little Girl, Ready Teddy. Both of these recording have more of a lounge feel, although Ready Teddy really rocks. King Drummer is from a popular Chinese soundtrack from a terribly famous movie of the same name. Rocky adds his smooth voice and simple lyrics to this classic hit. 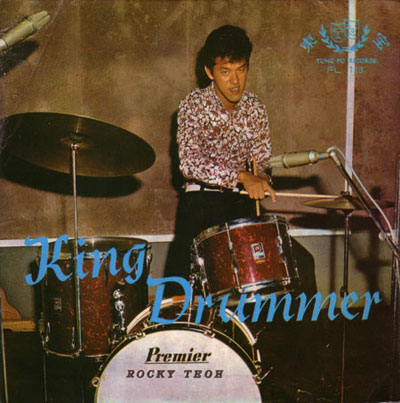 After 1967 Rocky’s history becomes vague. He continued to record, but with whom, when and where are speculation. The cover of Rocky’s EP Kristin shows him looking slicker than Rick surrounded by four sharp dressed men with cool coifs and black pegged pants. My guess the band is Los Indians, as this appears on Golden Horse Music. Other tracks include a wild version of Wolf Call (in Chinese) b/w Fifty Years & Lonely Girl.

Three more four song EPs were released by yet another label, Malaysia Musical Industries. The first, (still associated with Golden Horse) featured Go On Your Way & I’m Thinking b/w Memories & Tomorrow Night. On the second of these releases, the image of four shaggy haired men clad in paisley donning big belt buckles coupled with Elvis’ signature song, Suspicious Minds, leads one to conclude that it was produced circa 1969. On the last four song EP, there’s no Elvis but plenty of CCR, including Bad Moon Rising b/w Lodi & Proud Mary, and the odd title track, Bonnie and Clyde (Serge?).

At that time in Asia, it was not uncommon for music to be pirated and bootlegged immediately. Artists received a flat rate to record and made their money performing live. In addition to the hassle of trying to get paid, Rocky was plagued by drug problems. He got into trouble with the law sometime in the mid-seventies and split Taiping for Kuala Lumpur with his devoted wife and their daughter, Anne.

Rocky led the invisible life until Sept. 8, 1990, when he was invited to perform at Selangor Club KL for the Taiping Georgian Reunion Dinner in Kuala Lumpur. Many attendees described Rocky as looking slim and fit. His performance was energetic and entertaining. He had not lost his boss appeal, and he verbally expressed his feelings of gratitude for the warm reception. After leaving the grand affair that night, Rocky Teoh was killed in a automobile accident. Some suggested that he left intoxicated, which may have played a role in his demise.

Elvis Champion Titles: Accept it, Elvis was the king of R&R all over the world. Malay teenagers went mad for the Memphis man. There were, and still are, legions of Elvis impersonators and tribute acts all over Asia.

King Drummer: The song, I am Drummer, by King Drummer, appears on Steam Kodak, which is an excellent comp of SE Asian 60’s pop, psych and garage on Gray Past Records.

Facts for this article were gathered via online interviews. Thank you to H.T. Long, the Teoh family, Joe Chin from the Fabulous Falcons, Richard Joseph and Taiping Talk Group. Also the most honorable Toshi Taga for listening material and images. 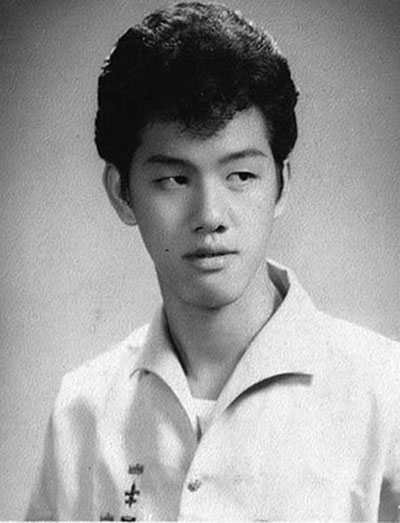